James A. Owen calls MythWorld “…an Urban Fantasy Pulp Adventure epic about ancient manuscripts, zen illusionists, opera, murder, magic, and the alternate History of the World” which pretty much covers anything he wants to pull into the story.

The first volume, The Festival of Bones, begins with a manuscript and ends with a murder. A mysterious prodigy, sometimes known as Jude, and sometimes known as Obscuro, invites Michael Langbein, a professor of ancient literature, and Mikaal Gunnar-Galen, a former singer who is now an ambitious department head at the University of Vienna, to a nightclub where he shows them a mysterious manuscript – the Prime Edda. Jude believes the ancient text, a mythology of Northern Europe, was once used by the composer Richard Wagner in some sort of ritual related to his Ring Operas.

Jude found the manuscript while in the Himalayas, where he also discovered proof of alternate histories of the world.  He says that in the past, those histories have overlapped with our own, causing things as we know them to shift and change – for a short time – in a phenomenon called an Inversion. Jude believes that somehow, the stories in the Edda relate to the overlapping of these histories and a forthcoming inversion, which he wants to witness.

They start to translate the work, but soon find themselves pursued by a number of parties all seeking to seize the Edda – and perhaps bring about The Inversion and with it, the end of the world in the terrible Winter known as Ragnarok.

The second volume called Invisible Moon, which is coming soon, takes place in a small haven called Silvertown, in upstate New York, where a journalist named Meredith has just received news of the murder of her father – Michael Langbein. But before he died, he sent her a clue to his death and to the strange and terrifying changes taking place all around the world: a page from the mysterious Prime Edda.

With the help of her lover Shingo, and the photographer Weird Harold, Meredith begins to investigate as a terrible winter settles over the world… and everything begins to change. Technology no longer works. Electricity fails. Vehicles are turning into mythological creatures… and so are the people – including Meredith herself, who may be turning into the Russian witch, Baba Yaga… 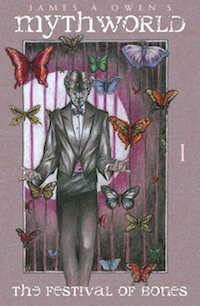 MythWorld Book One: Festival of Bones:
The first book in James A. Owen's first series, now available for the first time ever in print AND in English! Previously published in award-winning editions in Germany and in France, this new trade paperback edition of The Festival of Bones is the first chapter in a series that fans of the Imaginarium Geographica books will thrill and delight in reading. And in doing so, may perhaps discover the connections are closer between the two series than it first appears...
Price: $15.99
↑